In Roman times the road from Londinium to Verulanium (), now known as Watling St, passed through the site of present day Radlett. Roman pottery kilns existed near just south-west of the church. In the same area clay was more recently extracted for brick making.

The name Radlett appears to be derived from the Old English rad-gelaete meaning junction of roads. But although there  were clusters of dwellings, Radlett did not become a real community until the 19th Century when the Midland Railway was built and the population began to grow.

In 1864 the original - less than half the present size (just the side aisle on the side) - was consecrated to serve the new population of Radlett. This parish was now separated from the ancient parish of Aldenham, 3 miles away, to which it had belonged before. The church was endowed principally by the owners of the Newberries and Kendals estates, the Bagnall and Phillimore families, whose names appear in memorials in the church. Unusually the church is aligned on a north-south axis, unlike the usual east-west orientation with an east-facing altar.

By the turn of the 19th century Radlett had grown further. The churchyard had been opened, and it was decided to enlarge by adding the now main aisle and chancel. This was consecrated in 1907 and part of the cost was provided by the St Albans Diocese - on condition "that all seats be made free" instead of the previous pew-rent system, whereby seats were only available to those who paid.

Over the years various re-orderings of the interior have resulted in the present more open, carpeted style with movable chairs in place of many of the original pew seats, and the forward nave altar bringing worship leaders and communion table nearer the congregation. The latest development, completed in 2005, was the demolition of the old parish hall and its replacement by the splendid Christ Church Vision Hall joined to the church by the Rotunda entrance lobby.

Other features to look out for as you take a look around include the Clayton and Bell and other stained glass (including a new window on the theme of healing) the beautiful modern glass Angel Doors on the south side, the tiled wall patterns and painted roof in the Chancel, the carved stone font with its angels, and the statue and modern painting in the little Meditation Chapel on the south side. 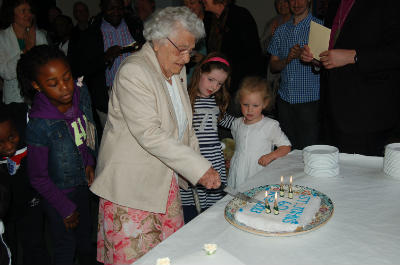 Our daughter church, St John's, was opened in 1953 to serve the Battlers Green area of the parish. Always a multi-purpose building functioning as both meeting place for the community and place of worship, St John's too has been enlarged over the years to provide more space for activities for young and old. It has a substantial stage, well equipped kitchen and a variety of different sized meeting room, the largest of which is set out for worship on Sunday mornings.

Since 2005 the parish of Radlett has been joined in a team ministry with Aldenham and Shenley nearby. Although each parish has its own council (PCC) and finances, we collaborate in a number of ways - eg Alpha Course, baptism and marriage preparation, exchange of ministers etc. Christ Church and St John's also belong to Churches Together in Radlett and Aldenham, and to the CCJ (Council for Christians and Jews) through which we have contacts with local synagogues in this mixed faith community.

Please find a more detailed history of the church in the file displayed on shelves in the entrance porch (narthex) at the back of the church.